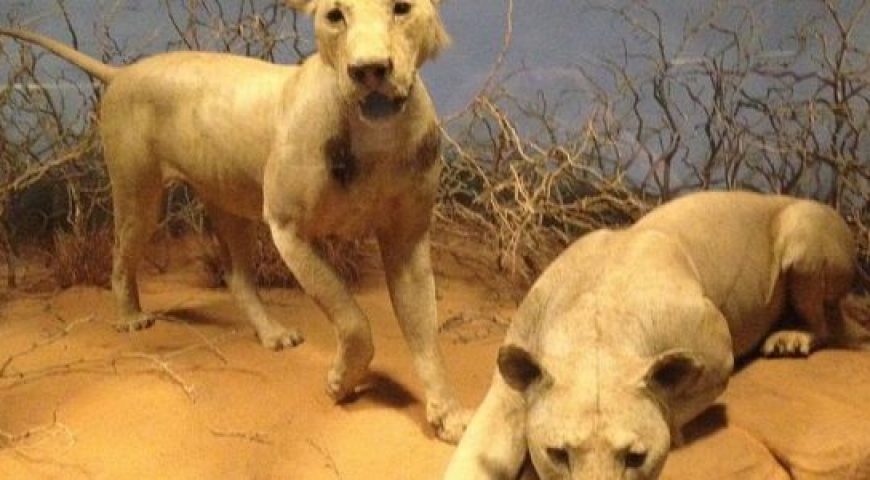 Legends of Africa: The Ghost and The Darkness

As part of the construction of a railway linking Uganda with the Indian Ocean, in 1898 the British started building a railway bridge over the Tsavo River in Kenya. The project was led by Lieutenant-Colonel John Henry Patterson. During the nine months of construction, two maneless male Tsavo lions thought to be brothers and nicknamed The Ghost and The Darkness, stalked the campsite, dragging workers from their tents at night and devouring them.  These lions have inspired many books, movies and even video games.

After various workers had gone missing, the remaining workers tried to scare off the lions and built campfires and bomas (thorn fences), around their camp for protection to keep the man-eaters out.  But the lions leapt over or crawled through the thorn fences. After the new attacks, hundreds of workers fled from Tsavo, halting construction on the bridge. Patterson set traps and tried several times to ambush the lions at night. His attempts were repeatedly unsuccessful until he shot the first lion on 9 December 1898. Twenty days later, the second lion was found and killed. The first lion killed measured 2.95 meters from nose to tip of the tail. It took eight men to carry the carcass back to camp. The construction crew returned and finished the bridge in February 1899. The exact number of people killed by the lions is unclear. Patterson gave several figures, overall claiming that there were 135 victims.

There are many different accounts of what happened and how the lions were eventually killed, but Patterson writes in his account that he wounded the first lion with one bullet from a high-calibre rifle. This shot struck the lion in its back leg, but it escaped. Later, it returned at night and began stalking Patterson as he tried to hunt it. He shot it through the shoulder, penetrating its heart with a more powerful rifle and found it lying dead the next morning not far from his platform. The second lion was shot at most nine times, five with the same rifle, three with a second, and once with a third rifle.

After 25 years as Patterson’s floor rugs, the lions’ skins were sold to the Chicago Field Museum in 1924. The skins arrived at the museum in very poor condition. The lions were then reconstructed and are now on permanent display along with their skulls.

The two lions displayed in the Chicago Field Museum, are known as the Crouching Mount aka FMNH 23970 and the Standing Mount aka FMNH 23969.  Recent studies have been made of the mounts, examining the bone collagen and hair keratin, which was compared to samples of modern-day Tsavo lions as well as skeletal remains of Taita people from the early 20th century.  From this analysis, scientists learnt that the Standing mount ate the equivalent of 10.5 humans while the crouching mount ate the equivalent of 24.2 humans.  This leads us to believe that the victims might have been closer in number to 35, although this number could be very different if various factors are taken into consideration.  These factors include the following: The human victims might not have been entirely consumed by the lions, due to being interrupted by scavengers, or by the other workers at the camp.  The lions might not have been hungry at the time of the killing or that the lions might have been killing just to kill and not to eat.  The numbers from Patterson’s account may also be inflated due to the fact that over the extended period of construction, many workers died in accidents, left out of fear or died of natural causes.  Patterson might have believed therefor that they were all simply eaten.

Reasons for the two lions’ man-eating behaviour have been suspected to be any of the following: the lions’ natural prey being devastated due to an outbreak of cattle plague, Tsavo lions being accustomed to finding and eating dead humans left along the slave route bound for Zanzibar by slave traders, the cremation of the mostly Hindu railroad workers, leading to scavenging by wild animals.  There are also theories that the first lion had a severely damaged tooth that would have hindered its ability to hunt.  Patterson disregards the last reason, claiming that he damaged the tooth himself with his riffle.  However, a recent study has found that one of the lions had an infection at the root of his canine tooth, which would make it difficult for him to hunt his natural prey.  Whatever these lions’ reason for preying on humans, one fact remains, the Tsavo Man-Eaters will go down in the African archives as ferocious Legends of Africa.