Size: 188 sq km
Location: Just outside of Nakuru town
Most Famous for: Large population of white rhino, excellent leopard spotting area, and its ever colourful flamingos.

Nakuru in Kiswahili means “Waterbuck Haven”. Lake Nakuru National Park, close to Nakuru town, was established in 1961. It started off small, only encompassing the famous lake and the surrounding mountainous vicinity. Now it has been extended to include a large part of the savannahs. It has unusual but beautiful vegetation. The forest vegetation is covered with Euphorbia, tall cactus-like trees and acacia woodland. The forest region is a host to over 400 migratory bird species from around the world. 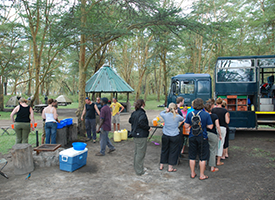 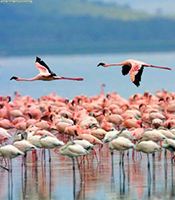 The park’s lake is internationally known for its lesser and Greater Flamingos. Ornithologists often describe Lake Nakuru as “the most fabulous bird spectacle in the world”. The Lesser flamingo can be distinguished by its deep red carmine bill and pink plumage unlike the greater, which has a bill with a black tip. The Lesser flamingos are ones that are commonly pictured in documentaries mainly because they are large in number. The flamingos feed on algae, created from their droppings mixing in the warm alkaline waters, and plankton. Lake Nakuru National Park is also shared with the white pelicans and the ever-snorting hippos. 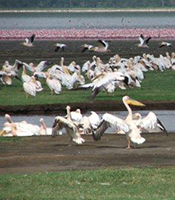 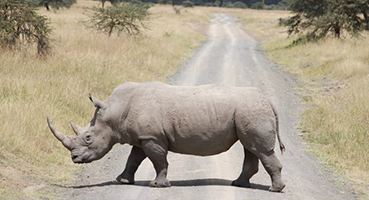 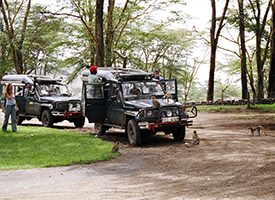 Other wildlife in the Lake Nakuru National Park include: The famous Black and White rhinos. The Black rhinos have been slowly multiplying over the years, and are well-protected. Thanks partially to the government of South Africa. Lake Nakuru National Park also boasts an increase in white rhinos. There are plenty of waterbuck, impalas, dik-diks, grants gazelles, lions, and leopards. In 1977, the Rothschild giraffe was introduced to the Park. The park also has large sized python snakes that inhabit the dense woodlands, and can often be seen crossing the roads or dangling from trees.

Lake Nakuru National Park is the only park in Kenya that is completely fenced.