Lake Naivasha is a beautiful freshwater lake, fringed by thick papyrus. The lake is almost 13kms in diameter, but its waters are shallow with an average depth of five metres. The highest of the Rift Valley lakes, Naivasha lies at approx 1880m above sea level. At the beginning of the 20th Century, Naivasha completely dried up and effectively disappeared. The resulting open land was farmed, until heavy rains a few years later caused the lake to return to existence, swallowing up the newly established estates.

Afternoon wind and storms can cause the Lake to become suddenly rough and produce high waves. For this reason, the local Maasai christened the lake Nai’posha meaning “rough water”, which the British later misspelt this as Naivasha. The lake and its surrounds are rich in natural bounty, and the fertile soils and water supply have made this one of Kenya’s prime agricultural regions. Much of the lake is surrounded by forests of the yellow barked Acacia Xanthophlea, known as the Yellow Fever-Tree. These forests abound with birdlife, and Naivasha is known as a world-class birding destination. There are over 450 species in the immediate area including the highland escarpments which surround the lake to the south and west. From October to March the resident bird population is generously supplemented by Palaearctic migrants. On the water, pelicans, and cormorants are numerically superior but the pride of place must go to the African Fish Eagle whose haunting call remains as significant to lake visitors, like the roar of a lion does in the National parks. 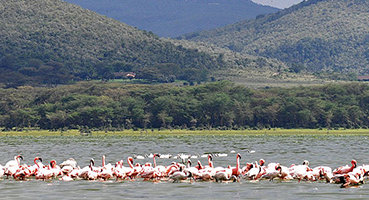 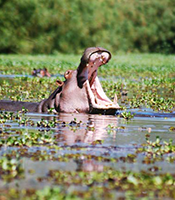 The waters of the lake draw a great range of game to these shores. Giraffes wander among the Acacia Trees, Buffalo wallow in the swamps, and Colobus monkeys call from the treetops while the Lakes’ large hippo population sleep the day out in the shallows.

Optional Excursion near Lake Naivasha: Hell’s Gate National Park lies beside the lake. This Park was named for its pair of massive red tinged cliffs framing a geothermal active interior of steam vents and bubbling springs. The park is home to a profusion of plains game and birdlife. This is one National Park that people are allowed to freely leave their vehicles which makes it popular with hikers and cyclists. 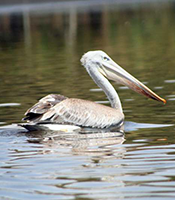 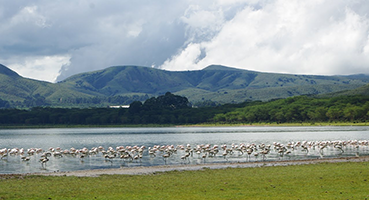 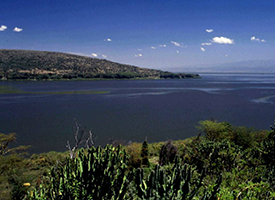 Elsemere – home of Joy Adamson (January 20, 1910 – January 3, 1980). She was a naturalist and author, best known for her book, Born Free, which described her experiences in saving the life of a lioness, Elsa. She was born Joy Friedericke Victoria Gessner in Troppau, Silesia, Austria-Hungary (now Opava, Czech Republic). With her third husband, George Adamson, she made her home in Kenya on the shores of Lake Naivasha. She studied and painted animals in the wild, and became famous as a result of the publication of Born Free in 1960. Several sequels were also published, two films were made: Born Free and Living Free. In addition to her books about lions, Adamson also wrote two books about Pippa, a cheetah she took on in 1964, first meeting her in an elegant tea room in Nairobi.